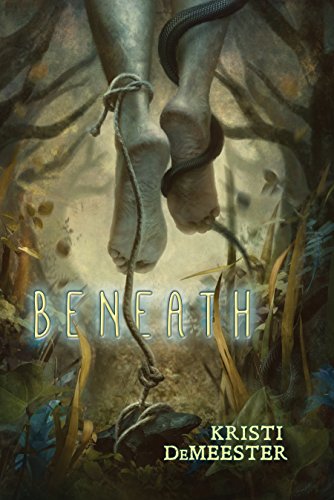 When reporter Cora Mayburn is assigned to cover a story about a snake-handling cult in rural Appalachia, she is dismayed, for the world of cruel fundamentalist stricture, repression, glossolalia, and abuse is something she has long since put behind her in favor of a more tolerant urban existence. But she accepts the assignment, dredging up long-buried memories as she seeks the truth.

As Cora begins to uncover the secrets concealed by a veneer of faith and tradition, something ancient and long concealed begins to awaken. What secrets do the townsfolk know? What might the handsome young pastor be hiding? What will happen when occulted horrors writhe to the surface, when pallid and forgotten things rise to reclaim the Earth?

‘Beneath’ is a lot of things. It’s a modern Lovecraftian horror dipped in gore. It’s a fists-up throw down against that particularly toxic form of religion that haunts our world. DeMeester’s debut novel succeeds in taking the well worn horror stand-bys (reporter plunging into a BAD situation & a town being consumed by the evil inside of it) and gives them a fresh coat of slimy paint.

This novel’s female lead is powerful and smart, which makes for great reading. As the book progresses her anger drives her forward into the horrible events around her. I like this heroine just as I fear the antagonist that she is pushed up against. The antagonist of this story (the occulted horrors referenced above) are unique and well-drawn.

DeMeester’s writing style is rich and flowing. You can smell the mountain air and feel the dark oppression that this crazed religious community has over it. We’re introduced to a lot of characters here (I want to list them but I don’t think I can without jumping into SPOILERS) but I never felt lost. ‘Beneath’ is well paced and confident. It’s a stunning debut through and through.

There it is. Kristi DeMeester is an incredible writing talent. I’m glad I picked up this novel. Her first collection, ‘Everything’s That’s Underneath’, has moved up a couple of spots in my TBR pile. If you want a gonzo horror novel for this autumn, you can’t go wrong with this one.

Logan Noble is an award-winning horror writer who spends his days with his wife and pets. His short stories have appeared in a number of anthologies and magazines, including Vastarien: A Literary Journal, Pickman’s Gallery, Déraciné Magazine, and Sanitarium Magazine.