It’s finally October and that means it’s time for this month’s Author Interview! Every month I’ll be interviewing authors and creators about their newest works, their lives, and what influences them. This month I’ll be talking to horror fiction’s favorite skeleton Orrin Grey. 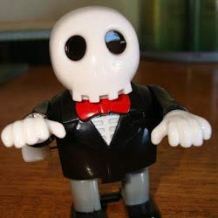 Hello Orrin and happy (28 days from now) Halloween! I want to thank you for taking time out of your busy autumnal schedule to have a quick chat with me. I’d like to start with an easy question: What made you want to be a writer? What turned you into the skeleton you are today?

I’ll be completely honest and say that I don’t know what originally made me want to be a writer. For as long as I can remember, it’s all I ever wanted to do. My mom had this book where she kept my report cards and class photos and stuff from all my years of elementary school, and for every grade it had a space where I could write what I wanted to be when I grew up. From about third grade on all it ever said was, “writer.”

That said, a lot of different things formed the specific writer that I am now. I went through various phases when I was younger, writing fanfic, trying (and failing) to write big epic fantasy sagas, all that jazz. I know that reading Roger Zelazny’s Chronicles of Amber was a turning point for me, in part because it was a very different kind of writing than I had read before then, and the zest with which he mixed and matched genre tropes was thrilling to me at the time.

Of course, I’m known by now for writing about and around film quite a bit. I’ve always loved movies, but I didn’t get into the older horror films that have become some of my chief influences until after I had graduated from college. When I was a kid, though, I used to have these Crestwood House Monster Books, which some readers may remember. They were little board books that I would check out from my school library, filled with black-and-white stills from old monster movies of the ’30s, ’40s, and ’50s. I used to pore over those things obsessively, mentally conjuring the movies that I imagined went with those images.

Probably the biggest turning point for me was getting into Mike Mignola’s Hellboy comics. Here was someone who was doing so much of the stuff I wanted to be doing, who was bending and blending genres, telling numinous supernatural stories built around chewy pulp centers (and vice versa), but perhaps more importantly, who was wearing all of his influences on his sleeve, so that reading his stuff became a gateway to countless other writers, artists, movies, and more that have since become huge influences on my work. Mike Mignola tells a story in interviews about how reading Dracula made him realize that all he wanted to do was draw monsters. Reading his work did something similar for me, but I can’t draw, so here I am.

I love your work. Your stories find the perfect balance of cosmic horror and creepy beasties. ‘Painted Monsters & Other Strange Beasts’ should be made mandatory reading for all young ghouls and ghosts. I’ve heard tell that you have a new collection getting ready to come out. What can you tell me about it? 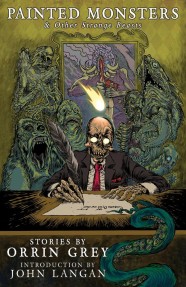 Guignol & Other Sardonic Tales should actually be out by the time this sees print! It’s being released by Word Horde, the same publisher who put out Painted Monsters, and I’m extremely lucky to be working with Ross Lockhart again. He was an early booster of my stuff, and I owe a lot to his faith in me and my weird stories.

Guignol collects fourteen of my spooky tales, four of which have never seen print before. Of the ones that have, several are hard-to-find, out-of-print, or seldom seen, so I think it’ll be a treat 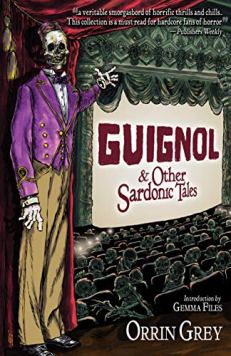 for fans of my work. There are two novelettes in the book, “The Cult of Headless Men” and “The Lesser Keys” and I’m really excited for people to check it out. Like Painted Monsters, it draws a lot of influence from movies and the theater, and its title, in fact, comes from the one-two punch of the Theatre du Grand Guignol, an early French horror theatre known for its bloody and lurid plays, and “Contes Cruel,” both a subtype of horror story and the title of a couple of early collections of same.

Guignol is filled with more of the kind of stuff that readers have come to expect from me, but this is also possibly my grimmest collection to date. While I hesitate to call the stories in it cruel, they certainly aren’t kind. Painted Monsters had a sort of unintended thematic underpinning of death and what comes after, while Guignol is more about dealing with trauma, and how the past, especially the painful past, never entirely leaves us alone.

It also probably has more monsters per page than anything else I’ve ever written, so there’s always that.

You, like so many other awesome folk, love horror cinema. I’m sure you have all kinds of movies ready to go throughout this entire blessed month. As a fan of the genre, what are some of the movies you’ll be watching leading up to All Hallows’ Eve?

I live in the suburbs of Kansas City, and we’re lucky enough here to have a really passionate and active horror film community. We also have a great local theatre, in the form of the Screenland Armour, which does Halloween programming all month long in October, so I’m hoping to catch a lot of that. As part of the launch festivities for Guignol & Other Sardonic Tales, I’ll be presenting a free screening of Mario Bava’s Black Sunday on October 14, and every year the Nerds of Nostalgia podcast hosts a horror triple feature sometime around Halloween, which has become my annual birthday tradition.

Beyond that, I watch a lot more horror cinema than anything else all year long, but as the Halloween season rolls around I tend to gravitate even more toward the old classics. There’s a new Blu-ray release of some William Castle titles on its way that I’m really excited about. Like every other horror fan on the planet, I’ll be watching the new Halloween when it hits theatres, even if I am less sanguine about it than many of my peers. And I am really looking forward to Apostle, the new folk horror flick from Gareth Evans and Dan Stevens that’s coming to Netflix this month. 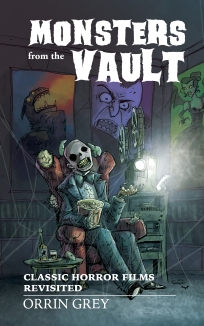 A lot of young writers I talk to get discouraged with the grind (sending stories out on submission, etc.) and the constant struggle that is the publishing world. Do you have any advice for any writers looking to get published?

Maybe the best piece of advice I ever got in this business was, “Know your victory conditions.” Know what success looks like to you. It’s easy to lose focus when you’re in the proverbial mines, but if you can remember what it is you’re trying to accomplish, you can work towards it. For some people that means critical acknowledgement or winning awards, for some people that means getting a lot of fans or readers, for some people that means making a living at writing. For some it means something else completely. Those things aren’t mutually exclusive, you may get all of them, but if you know what’s important to you, it’ll help you make the hard decisions when they come, and keep you from getting turned around in the dark.

Let’s talk about books for a minute. What’s in your TBR pile currently? Are there any stories/novels you like to read to get into the October spirit?

My TBR pile is so careeningly, terrifyingly cyclopean that it beggars belief, let alone description. I am so far behind on my reading that I barely know where to begin. That said, I recently finished Matthew M. Bartlett’s first collection (I had already read his later ones, but had missed the first) and, like all of his other work, it blew my mind. He is, for my money, one of the best authors working today, and I am always wowed by his stuff. I’ve got a gobsmackingly long list of stuff in my queue, but right now I’m trying to make my way through William Hope Hodgson’s The Night Land, which, as I had been warned countless times, is a slog. 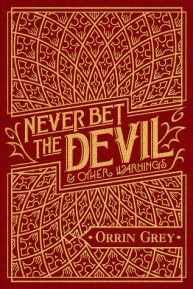 Last  question: Where can people find your works?

Probably the best place is in one of my collections, which I will have three of by the time this sees print. Never Bet the Devil & Other Warnings, my first collection, is now available in a deluxe hardcover from Strix Publishing, while Painted Monsters & Other Strange Beasts and Guignol& Other Sardonic Tales are both available from Word Horde or wherever better books are sold. You can keep up with me on Facebook, Twitter, or Instagram, and you can always find out the latest stuff I’m doing on my website. I have a few stories available online, as well, including a recent one at The Dark and several on PseudoPod.