Happy February! It’s the first Wednesday of the month, so that means it’s time for another Author Interview! This month’s interview is with haunted radio jockey/author Matthew M. Bartlett!

Hello Matthew! I’m very excited to be interviewing you today! I like to start my interviews off with the lord of all softball questions: tell us a little bit about yourself. What made you want to be a writer? What do you do when you’re not putting words on a page?

When I was little, I wanted to write a magazine about the neighborhood kids. I named it Magazine Magazine. It never made it to even the first issue. To be fair, I was maybe seven years old. So the desire was there long, long before the ability.  That desire hit me early on, because I was a reader. I read a lot of Hardy Boys books and Alfred Hitchcock’s Haunted Houseful, and whatever I could get my hands on, Reader’s Digest, books based on the television show Get Smart, stuff on my parents’ and grandparents’ bookshelves. Then my grandparents, knowing my love for the Universal Monsters (I’d never seen the movies but was transfixed by the pictures), bought me King’s Christine, and the novelization of the first Omen movie. I was on the cusp of being a teenager then. I still wanted to write, but couldn’t manage to put anything decent together. A lot of writing was intimidating; writers seemed to know a lot about the world that I simply didn’t. In college I wrote poetry for classes, and I’m proud of a lot of that stuff. I admit that I’ve pilfered some lines from my old poems for my fiction. At that time I was reading a lot of American novelists like Mailer and Kesey and John Irving, and the Beat Generation writers, too. In my thirties I found my way to Lovecraft and Ligotti and Aickman, and I read all the King I could get my hands on, still. It wasn’t until I started up a fiction page on Livejournal, writing short pieces that ended up in Gateways to Abomination and Creeping Waves, that I essentially taught myself to write fiction. That was in 2004. I was 34 years old, and I didn’t put out Gateways until ten years later. During that ten years, I didn’t really think of myself as a “writer,” because I did not have the need to write every day, or even every week. That has changed.

When I’m not writing, I’m either at my job or lounging around watching television or movies with my wife and cats. Or else I’m reading. I’m not exactly living a fast-paced, exciting life. I hope you weren’t hoping I’d say “rock-climbing” or “body-surfing” or “traveling to distant lands.”

I think your creative voice is wholly unique. I find it dream-like, each horrifying image like a flashbulb in the dark. Anyone that knows their horror can spot a Matthew M. Bartlett story from across the room. Can you talk about what goes into a short story for you? What does your process look like? 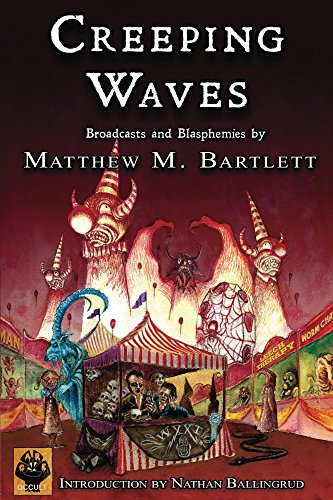 It always starts with a vague concept, or a word or a phrase, one overheard or one that jumps into my head. The way I work is, if I sit down and open up a work in progress, or open up a new blank document with an idea in mind, I write. It’s automatic. If I don’t, I don’t. So I get myself to that computer every day and I open up that document. I rarely have a map in my head of where a story will go. Most times I have only the beginning. Sometimes I have that and the end, and no middle. And I just go where my mind takes me. And I do a lot of internet and book research, sometimes just to get tiny details right. I usually have a few projects going, so if I find myself stuck on one, I bounce over to the other.

You have a novella being published by Darkscape Press later this month. It’s called If It Bleeds and it looks absolutely incredible. What can you tell us about this new book?

This is a book very much in the vein of Gateways to Abomination, in that it’s a stringing together of short pieces that connect with each other in angular ways. They all revolve around a singer, and a song, and a deal with someone who isn’t quite the devil.  There’s a visit to a home for wayward boys, a strange incursion at a Gentleman’s Club, a grisly scene in a building near the National Mall in D.C., and a lackluster performance by a local band on a town green. There are beheadings, at least one shooting, and a few stabbings. So, essentially, it’s a love song, a sing along, a homicidal radio play without a

hero. The book basically serves as a prologue to the third full-length book about my fictional radio station WXXT, with Gateways being part 1, and Creeping Waves being part 2. The third book will have a lot of stuff about the FCC, or at least my version of it, which involves corruption and black magic. Right now I see it as a traditional novel, not a mosaic novel like the first two. The book has a cover and a frontispiece by the incredible Yves Tourigny, and gorgeous interior color illustrations by Luke Spooner. Incidentally, Nightscape will also be publishing a three-book set of illustrated hardcovers including my book Gateways to Abomination, Jon Padgett’s Secret of Ventriloquism, and a book of short story collaborations by me and Jon. It’s called Secret Gateways. Secret will be illustrated by Harry O. Morris, Gateways by Aeron Alfrey, and something special is in the works for the third book.

A lot of young writers I talk to get discouraged with the grind (sending stories out on submission, etc.) and the constant struggle that is the publishing world. Do you have any advice for any writers looking to get published?

I do, for what it’s worth. A lot of it is common sense and nothing you won’t hear elsewhere. Read widely and often. Put your head down and put in the work. Write wherever and whenever you can. If you’re serious, and want to be a professional, don’t let video games and television take over your free time. Writing should bring you enjoyment, but remember that it is work.  Aim high. Don’t give away your work. If you receive feedback, try to put aside your ego and see if there’s any worth in it. Understand that if one venue doesn’t want your story, it doesn’t necessarily mean it’s a bad story; it

might not be to that editor’s taste, or it might be not quite what he or she was envisioning for the work they’re putting together. Behave on social media. Know how to read the room, so to speak. Read what people in the writing community post for a long time before you wade in. If you have a book you want people to buy, don’t push it on them. Don’t friend writers, editors, and publishers on social media and then immediately ask something of them, like “look at my book, like my author page.” Self-promote only in spaces where self-promotion is explicitly requested. This is important because the genre fiction community on social media is smaller than you think, and we all talk to each other. Bad behavior gets around. Keep trying, if publication is what you want. Discouragement and rejections are part and parcel of writing. A thick skin and a belief in yourself are assets. Finally, and this may be a hard pill to swallow, if writing brings you nothing but misery, if you’ve given it all you’ve got to no avail, there’s no shame in stopping.

Let’s talk about books for a moment. What’s in your To Be Read pile right now? Any books you’re looking forward to in the future?

I’m currently reading Coyote Songs by Gabino Iglesias, who is a true poet and a compelling writer. The new Simon Strantzas collection Nothing is Everything is in the mail, on its way to me. I’ll soon be starting A Rather Haunted Life, a Shirley Jackson biography. I’ve pre-ordered Carnivorous Lunar Activities by Max Booth III, and Wounds by Nathan Ballingrud, who is one of my absolute favorites. I also have House of Windows by John Langan to look forward to, and I’m really looking forward to his next collection. I stalled out on Don DeLillo’s Mao II, but may pick that up again for a re-try. Otherwise, I dip into the massive amount of collections and anthologies both old and new I have sitting around my house.

Where can people find you online?

My website is www.matthewmbartlett.com. I have a Patreon site where you can see and hear not-yet-published pieces and readings. I occasionally tweet but mostly retweet at @MattMBartlett. I’m on Facebook a lot.

Thank you for joining me, Matthew! This ends today’s transmission… Try not to pay to much attention to the voices hidden in the static…